With a wireless mesh backbone network across the port, every employee can get the information in a dynamic environment.

Overview
Overview The challenge The solution The result Related content

It’s one of the larger terminals in Europe, with a team of over 900 people keeping things running smoothly.

In logistics, efficiency is everything. That’s why DP World Antwerp’s fleet of vehicles – including straddle carriers and cranes – need to be constantly connected. But with a huge area to cover, avoiding signal dropouts is tough.

“If a terminal’s network went down, and it lasted longer than a few hours, the impact would be disastrous,” explains Jef Lambregts, DP World Antwerp’s head of engineering. “You’d have all the trucks queuing to bring or pick-up containers, and you’d have queues all around Antwerp.”

According to Philippe de Crombrugghe, global account director for our Global division, DP World Antwerp needed a wireless connectivity solution that could transport all its data in real time, without compromising on security. It had to be resilient, carry large amounts of data, and it couldn’t go down. And because the team plan to integrate more functionality into their operations in the future, they also needed a network that could evolve alongside the company. One that could handle Internet of Things devices, geolocation devices, truck scanning and video streaming without breaking a sweat.

“We handle more than 200 trucks an hour, so the system has to be very reliable. If it went down, it would be like looking for a needle in a haystack,” explains Jef.

Timings for deployment were very well agreed on, and also kept. If there was an issue it was immediately solved.

We started with a pilot program, to test the approach and make sure the wireless backbone technology and approach would work in the port environment. Once it was approved, we created a terminal-wide solution that kept costs low, without compromising on connectivity. We also made sure the network supported the static and dynamic elements of DP World Antwerp’s operational environment – a key part of their digital transformation roadmap.

Deploying Rajant’s Kinetic Mesh technology, we created a stable backbone solution that would keep everyone connected to the same network, even as they moved around the port. “A Rajant network maintains multiple connections at all times, and is constantly scanning the environment to check the fastest route for the data, from source to destination,” explains Chris Mason, Rajant’s director of sales. So if corrugated containers block or disrupt connections, the network will route around it to maintain the signal. Which means there’s no single point of failure.

And if DP World Antwerp wants to make changes to the network, it doesn’t have to reconfigure anything. It’s all done seamlessly and automatically in the background.

The reliable wireless backbone means DP World Antwerp’s operations across the Antwerp Gateway terminal can always stay in touch with the central system. So they get the information they need, when they need it. And because the network is future proof, it can also support new ways to work more efficiently and save on costs.

In the logistics industry, it’s essential to stay a step ahead. And with the wireless backbone, it’s easier for DP World Antwerp to innovate, work more efficiently and stay agile in an industry that is quickly moving towards automation.

“In the last few years there has been a big move towards automation of the container terminals,” explains Jef. “This network opens new opportunities for us. One of the things we’ve started testing now is related to the Internet of Things. With the wireless backbone network, we’re able to receive messages from machines about their condition. In the future this will allow us to predict when the machines need to come in for maintenance.”

With a new, adaptable network in place, DP World Antwerp is one step further on its journey towards digital transformation.

Within the logistics vertical, digitalisation will help them increase their efficiency and lower their environmental impact.

The new network is also highly scalable, which means there will always be bandwidth capacity available as DP World Antwerp grows. And unlike a traditional wireless network, the Kinetic Mesh Network operates on multiple frequencies and multiple paths. So DP World Antwerp can add as many new devices to the network as it wants without efficiency dropping.

With our wireless backbone solution behind it, DP World Antwerp is one step closer to its digital transformation goals. And when new technologies roll out worldwide – like wind-powered container vessels and connected drones for loading and unloading – they’ll have the network to support them from day one.

SOLUTIONS Connect your organisations and securely access the cloud, globally

Unlock your infrastructure and expands as a digital business 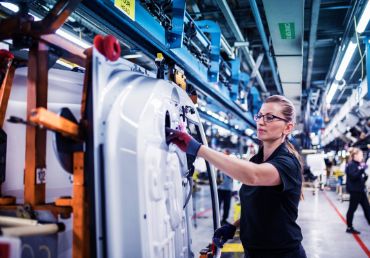 Don't just talk about digital transformation. Do it.